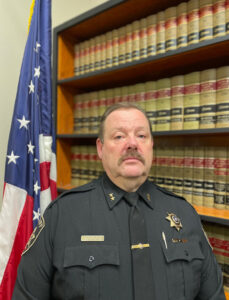 2023 will begin my 39th year in Law Enforcement. My career began as an officer at the Onondaga County Department of Corrections in Jamesville. While there, I worked as a Section Officer, Booking officer and Perimeter Security.  I was later assigned to the Tour IV Team which was in charge of Visitation, Weekend Sentenced Inmates and support Services. In 1988 I was hired by the Sheriff’s Jail Division and attended my second academy. Upon graduation I worked various shifts as a Housing Deputy.
After working in the in Jail Division for a year I completed the CNY Police Academy. My first assignment was Road Patrol at the North and South Stations where I became a Field Training Officer.  In 1993 while still supporting Road Patrol I became an Evidence Technician for the Criminalistics Unit, where I collected, photographed, and processed evidence. While in the unit I continued my education by attending the following schools;  Basic and Advanced Accident Reconstruction, Latent Print Development and Identification, Blood Spatter Analysis, Level 1 Fire Investigator, Firearms Instructor, General Topics Instructor and  Critical Incident Management.  I eventually transferred to The Center for Forensic Sciences as a Latent Print Developer in 1997. My extensive training has allowed me the privilege of testifying as an expert witness in Local, City, and Federal Courts.
Prior to my retirement in 2009 I was transferred to the Heliport/Special Enforcement Unit where I became the Departments Armorer and Firearms Coordinator. I was responsible for biannual training of 425 armed members of the Department, and Lead Firearms Instructor for the CNY Police and Custody Academies. At this time I also worked for Marcellus Village Police as a Patrol Officer and Student Resource Officer.
After my retirement form OCSO I continued working in law enforcement. I worked as an Assistant Director and Director of Campus Safety at OCC for 5 years. I supervised both command and front line staff while overseeing scheduling, Evidence and Property. I also developed operation plans for SRC campus events such as High School and College Graduations, Jazz Fest, and Concerts.
I then accepted a job at Cazenovia College as Campus Safety Director for a short time before moving on to CCC Fulton Campus as The Assistant Director of Campus Police. While at these campuses I was responsible for planning, operations, budgets, staffing, Title IX investigations, State and Federal reporting and Active Shooter Trainings until my retirement in April of 2022.
Although my other positions in the community were fulfilling, I am truly thankful for the opportunity to be able to return to OCSO as Chief of the Custody Department.

The Mission of the Onondaga County Sheriff’s Office Custody Department, a county correctional law enforcement organization, is to ensure public safety for the citizens of Onondaga County by providing premier and cost-effective prisoner custody, security and transportation services. We will maintain the confidence that the public has placed upon us by developing a safe and secure community, through having a positive impact on the persons we detain while maintaining a humane environment at the Patrick J. Corbett Justice Center.